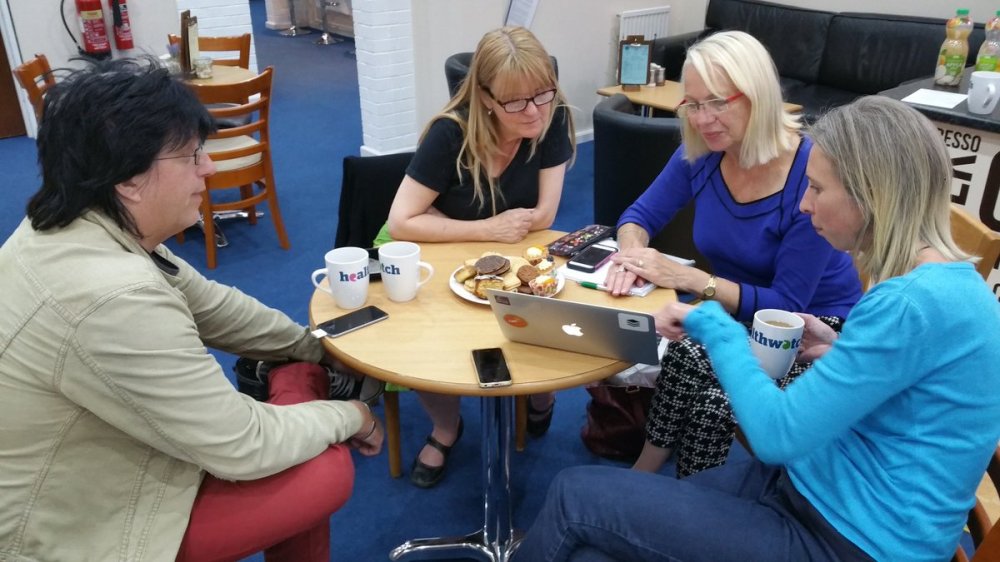 Once again, giving time to help people at a social media surgery has generated that amazing feeling which has been coined #socialglow (I think Paul Webster came up with that one). This month we helped Tracey and Sue, both members of Stourbridge Speakers Club (@StourSpeakers on Twitter). They want to help to spread the work about the Speakers Club and share the great stories from their activities. Both Tracey and Sue have been doing a fair bit of listening on twitter, clearly felt there was potential in using it, yet had some questions which needed answers before they might move forward.

Sue’s first question was: “why use Twitter?” Mel from Healthwatch Dudley gave an eloquent response, highlighting how Healthwatch uses Twitter during their day to day activity, and gave an example of a recent event and how they engaged all sorts of people who weren’t actually at the event by talking about what was happening on Twitter. I shared slides from Bryony Taylors Simple Guide to Twitter – I still find this so useful when talking to people new to Twitter.

We shared some simple tactics to increase engagement, such as sharing photos, and tagging people who support and have interest in your activities in photos. We demonstrated the power of asking questions – by asking why our followers use twitter. We soon had some responses…

The next question was around what to say, and all sorts of concerns about using social media for different things – work and passions, and keeping private life private. The three of us helping out use social media in quite different ways, so we were able to talk about what approach each of us takes and why – and why all of these different approaches are equally fine.

We showed ways that hashtags can help draw conversations together on Twitter, and soon we were asking Sue and Tracey all sorts of questions about Stourbridge Speakers Club and were interested to find out that it is for people who want to increase their confidence in public speaking.

As the surgery drew to a close both Tracey and Sue were wearing happy smiles and, unprompted, were talking about how inspired they felt. Tracey said she had hoped the surgery would increase her confidence, “but the inspiration was an unexpected extra – now I want to do it!” Sue told us that she now has the confidence to tweet and she felt quite excited! And how lovely that by the time I got home I had Twitter notifications from Sue’s tweets:

@piratesprite @dosticen @nealepilkington thank you for a brilliant insight into Twitter. I will be twittering in the future for sure

If you’d like to experience the social glow which comes from sharing even just some of the basics of using social media with someone involved in community activity, simply offer to help at a social media surgery near you. It really is rather wonderful.

If you'd like a round up of what's going on and what we're celebrating here delivered to your inbox then subscribe here. The emails are compiled and sent with love, though no regularity whatsoever! Don't worry, you'll never receive more than one a month.